Okay, I’ll admit it, I’ve really struggled to get motivated to go back out and train after running the Great North Run – that was nearly a MONTH ago!

But now, I’ve managed to get out on the roads and of course, I picked the night that the heavens opened to start my winter training to see out the year.

I’ve had a two week lay off to recover but then two weeks after that I’ve been working along with England Athletics to help them get videos made for their Regional Awards evening and it’s only now that I can plan my 2016 calendar and hit the hills and road for winter!

I’ve been cycling to work everyday and I’ve been doing the Parkrun at Newcastle every Saturday to keep that bit of sharpness in my legs – I’ve already PB’d! Running 21:22 and that’s without training as well, so sub-21 is definitely on the cards, which is an amazing thought since I didn’t even think I’d get close to that time when i started running in 2013.

That’s my goal for the winter, hit as many 5ks as possible and work up to the 10ks for 2016, keep the endurance there but have that bit of speed to carry me over three miles at roughly, 6:40 minute per mile. If i can do that, I know i’ll be in good nick for the season ahead.

Tonight’s run though, was surprisingly fresh and easy to return to, I genuinely thought I’d struggle after the first mile and realise my fitness isn’t that up to scratch. I think the cycling I mentioned earlier has made sure that my body is still that little bit sharp and my aerobic capacity was topped up from my break – also helps there’s a few hills during my route to give me that burst for the lungs to work. 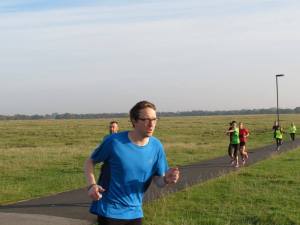 I have the hunger again, I’m itching to race and really looking forwards to seeing how well training will go to see if i can push for a sub-21 and maybe, just maybe a sub-20, if i can work my backside off, here’s hoping.

But with all that positivity, there has to be some negativity.

All of last month I was campaigning for this blog to be shortlisted for the North East Blogger Awards, an event that celebrates the Region’s top bloggers – I thought my blog would be good enough to get recognised, sadly I was wrong.

I think with my blog not having a full domain and only being active for a year, I would have struggled to give the panel something for them to consider.

So when I found out I wasn’t in the final shortlist, I definitely spat my dummy out and arrogantly, thought my blog should have been included.

Now the dust has settled, I’ve let it go, I shouldn’t be so arrogant nor pinning my hopes on winning a blog award. Blogs are supposed to be about fun and relatable posts, making sure that it’s strong content too, if my site gets an award, then it’s an added bonus!