Almost two weeks ago, almost, my iPhone pinged with a message notification. When I looked at who it was from, I had to do a double take – it was from 2016 Olympian, Aly Dixon!

In shock, I read the message over (I read it more than twice) and looked as ways of getting the time off to attend the launch of the Siglion Sunderland 10K & Marathon of The North. This would be my first event I’ve attended since blogging back in 2014 and I was incredibly excited to be there and soak it all in – I instantly thought of vlogging the day.

Of course, my luck is rubbish at the minute and on the Friday before the event, I succumbed to a flat tire on my car, the only journey I could take was the train, which, I don’t mind, I mean, it’s spending money that I don’t really have but nonetheless, it was so incredibly worth it, especially for the video making, which you can find below.

On the morning of event, I got the train through to Newcastle via Cramlington and then, thankfully, the Metro’s were up and running, after a slight scare, when the service confirmed that no trains would run through to South Hylton, Sunderland is a few stops before then, so I was slightly nervous but I had nothing to fear in the end!

Typically, I arrived an hour early, I always do this, I suppose it’s not a bad thing, so I sat in Cafe Nero and gulped on some lovely coffee. 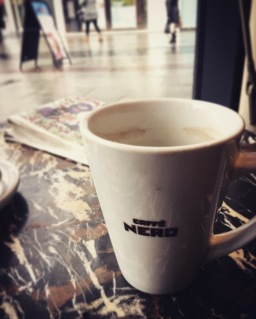 As it got closer to time to the press conference, I made my way to Katie Bulmer-Cooke’s pop up store in the heart of The Bridges, (which you NEED to check out by the way, before it disappears!) and seen the set up straight away. First thing I did was ask Katie where folk go to register – I definitely got a little star struck as I was rooting for her while she was on The Apprentice.

Once I got registered and given my t-shirt, I was quickly made aware that there would be a special guest arriving to help launch the event and also announce something too. Little did I know that would be, none other, than Paula Radcliffe! I could not believe it and before I had a chance to let that settle in, Paula walked into the shop, followed by Steve Cram – I was in a room with Running Royalty!

The presser was no more than 15 minutes for the local media and once that was complete, we (there was 50 or so other runners) were whisked to Keel Square to allow the media to complete further work as a bunch of us had our backs to them – for promotional purposes, fear not!

It was then down to the little 3k ‘flash mob’ run through Sunderland, turning heads as we did so and it wasn’t just the fluorescent t-shirts either! Many of the public stared and some even clapped as we made our way back to the Debenhams entrance of the shopping centre.

More photos followed and finally, I got a chance to have my photo taken with Paula AND Aly at the same time, two great runners that I look up to. I still can’t believe that I got to do this and run with Paula, too!

Catching up with Luke Adams, as well, made the morning outstanding. It’s been a while since I chatted with the man behind the Run, Eat, Sleep training groups and events (check them out HERE), I am actually down to do some of his events later this year, including a guided trail run – my first ever trail run, like, ever!

At the end of it all, I was incredibly thankful for Aly to invite me and soak it all in. I’m very grateful when it comes to given opportunities like this and I make sure it grab it with both hands. I hope this isn’t the last event I get to experience, it’s something that I very much enjoy, plus, I get to meet new folk!