It’s been and gone. One of the most iconic races on my running calendar has, again, been ticked off my list as I have completed my THIRD Simplyhealth Great North Run.

It’s all be highs throughout my training block and I’ve never felt stronger than I did over 11 miles –  the two and bit HURT.

At the turn of the year, I wasn’t looking to enter the GNR. We just bought a house, so it wasn’t something I was looking for until we sadly lost my Granda in May, that’s when the fire was lit, that’s when my desire to enter the half marathon kicked in.

As Granda was registered as blind, I wanted to run for a charity that helped people with sight loss and the RNIB was the perfect fit.

Training pretty much kicked off from there. I ran in the heat, the cold, the rain and any other weather conditions that were thrown at me. I had a sole purpose of getting through each and every session – to do this for Granda.

Over the 16 weeks, I ran a record number of races, personally. Something I’ve never done before since taking up running back in 2013. Running a new PB 10km and numerous 5km season bests, while making new friends and exploring routes along the way. 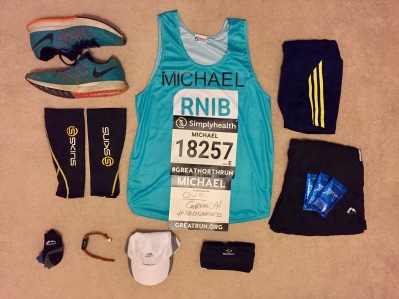 When it came to race day, this was the most nervous that I’ve been running the Great North. Why? I think there was that demon still lurking in me from 2015, where I stopped multiple times and I didn’t want that to happen again. I kept telling myself that this one is just for fun, enjoy it, smile and get involved.

It was great to catch up with some of the runners from Team Totum, as we walked about, had a chinwag and having a laugh, easing any nerves that may have loitered beforehand. Saying that, I’m gutted we didn’t get Andy in the pre-race selfie before we headed down to our zones!

I used the free space that remained to get a warm up in, no chance was I getting injured, I’ve come too far for that to happen.

As the wheelchair athletes, Elite Women and finally, the Elite Men, with the masses got going, this was when I started to blubber. Thoughts of my Granda and what he would be saying now, as well as going through everyone’s words of encouragement hit home, this was it.

I clocked my Garmin and tried to mentally prepare myself for 13.1 miles. I’ve run this course twice now, so there’s no excuse for struggling at a certain point.

Between miles one to eight, I felt great, I really did. I was smiling continuously, high-fiving, while giving struggling runners encouragement too. Even though I could sense my energy levels draining from there. Team RNIB was just the lift I needed giving me a great big cheer.

I saw my family and friends along the John Reid Road, again, providing a much-needed boost. I was, honestly, fine right up until mile 11, that’s when my legs told me, “enough, is enough, Michael!”

Stopping wasn’t an option, if it meant I had to slow down, then I would slow down, I’ve run too far to pack it in, so I kept running, and running and running, Until, I could see the finish, I just had to navigate one last mile, the longest mile…ever. 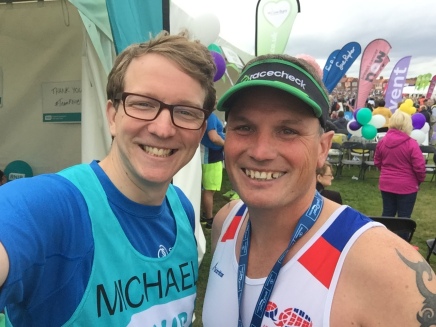 By the time I got my medal and looked after in the RNIB tent, Peter messaged me and came over. I was absolutely buzzing for him.

It’s been 13 years since he ran the Great North Run and was told he’d never run long distances again following knee surgery and here he is with a 2017 medal around his neck and I could see how much it meant to him. I’m mega chuffed he got to do it. He was one of the first people I met at Team Totum meeting, along with Iain, and helped me with the blind run challenge, as well.

After a couple of pints with family, shower and change of clothes, I made my way back home, proudly wearing my medal. This was something I longed for after a year away, it’s really kick started my love for the event.

The money that I’ve raised has been incredible and I know that my Granda would be proud.

This one was for you. 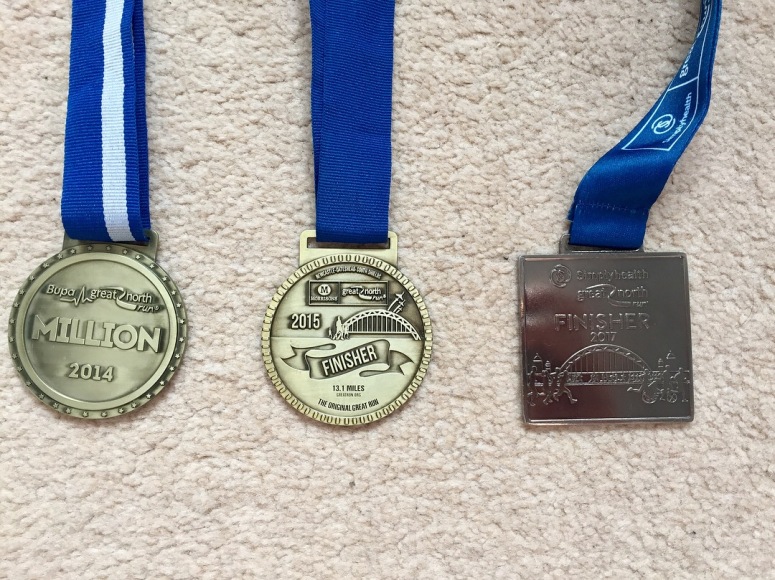